PRESENTATION: The passage of electricity through the different parts of the circuit is regulated distributing appropriate resistance values which combine in the simplest of cases in series or in parallel, to allocate difference in potential and intensity.

INTRODUCTION: In a circuit in series the intensity or electric current is going to be the same for all the circuit however the voltage (or tension drop) is to be distributed depending on the resistances, where there is more resistance there will be a bigger drop of tension. On the contrary in a circuit in parallel the tension will be the same and the current will be distributed among the branches in parallel, but the higher amount of current will go through the path that offers the least resistance.

OBJECTIVE: To observe how the current intensity is allotted in the different electrical schemata (series and parallel).

SETUP: First we prepare the junction boxes drilling the necessary holes to place both the sockets as the switches. We cable the circuit according to the predesigned experience. We place the electric bulbs and connect them to the current. This project can be dangerous as we are working with 220 V tensions and there exist some electric risk, for we have to take the required security measures.

EXPLANATION: For the first case (scheme 1) when the light bulb branch ‘C’ remains open the electric current only passes through the branch ‘A-B’ and the intensity of the current is equally divided between those two light bulbs. It occurs in a similar way opening ‘A-B’ and closing ‘C’ but here as it is only one bulb this will shine with less intensity. But if we close all the circuit the light bulb which shines most is ‘C’ because the electric current tends to pass to a greater extent through the path that offers the least resistance and in this path occurs that for the branch ‘A–B’ there are two resistances and for the branch ‘C’ only one. In the second case, we keep the branch of the light bulb ‘F’ sharing the circuit ‘D–E’ in a series circuit, and as a result the intensity is distributed between the 2 bulbs. However, as soon as we close the ‘F’ branch, the ‘D’ light bulb stays in series and the other two in parallel, consequently the ‘D’ light bulb shines completely and the other two hardly shine because they share the spare intensity between them 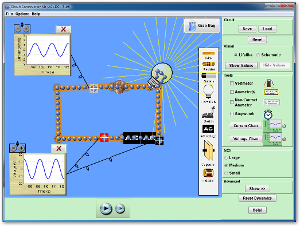