PRESENTATION: The triboelectric effects are used to define the sign of charges. A glass stick rubbed with fur has a positive charge and a plastic stick rubbed with wool has a negative charge. These effects show when suspending the sticks and watching the processes of attraction and repulsion.

INTRODUCTION: nature is composed of atoms and these of subatomic particles in their turn, some of them with electric charges. The static electricity is a phenomenon which is due to the accumulation of electric charges in an object. After being electrified they exert attraction or repulsion forces among them. These actions are observed in objects in solid or liquid state and gases. Examples: water, plastic, metals, glass or rubber.

OBJECTIVE: to test the phenomenon of static electricity making a “propeller” rotate.

SETUP: We will need a wooden base to place the pivot element in such a way that it is vertical at 90 ° with respect to the structure. The rotating element, that rotates 360º horizontally, is connected by the rule. 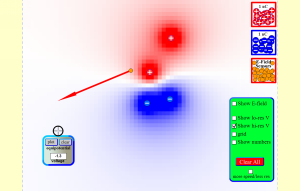