PRESENTATION: Archimedes’ principle establishes that if a body is totally or partially submerged in a fluid, then the fluid exerts a force upwards on the body that is equal to the weight of the fluid displaced by it.

OBJECTIVE: Verify the stability of an object in the face of several perturbations.

MATERIALS: a tray that is four or more centimetres deep, a beaker with a lid, a 20 cent coin.

SETUP: The tray is filled with water and coins are placed inside the plastic beaker and/or on the lid, depending on which experiment is to be carried out. Finally, the beaker is placed on the water and its stability can be checked.

EXPLANATION: The equilibrium of a floating object is stable if small perturbations in the state of the object make the buoyant force produce a moment of rotation to restore the object’s orientation and return it to the initial state of equilibrium. This happens if the centre of mass is located below the centre of buoyancy. If the object is barely stable, the centres of mass and buoyancy almost coincide. These concepts can be applied in the calculation of floatability for vessels, and how floatability will be modified when cargo is carried. 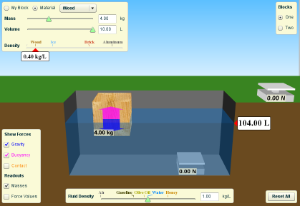