PRESENTATION: An optical system is a set of surfaces that separate media with different refractive indices and that can be: reflective (mirrors) if they reflect most of the light that reaches them; or refractive (dioptres) if they refract most of the light that reaches them. In centred optical systems, a combination of the previous two, the surfaces (flat or spherical) have their centres of curvature, C, aligned on a straight line called the optical axis.

INTRODUCTION: Optical effects are a part of our everyday lives. For instance, when we use a pair of spectacles when we go window shopping for clothes, and even when we look through the glass of water we are drinking. There are many more examples.

However, we are often not aware that we are seeing “deformed” images through optical elements such as lenses or dioptres, and we do not even manage to identify these things for what they are, even when they produce an inversion of the image itself.

OBJECTIVE: To verify how, when observing some letters through a glass bottle filled with water, we can appreciate inversion of the letters that do not have an axis of symmetry while seeing that the symmetrical ones are apparently “in the same position”.

MATERIALS: a cylindrical glass bottle, water, a piece of paper with LEAD OXIDE written on it in capital letters.

SETUP: To carry out this simple experiment, fill the glass bottle (a plastic one will do) with water, making sure there are no air bubbles left inside. Then place the bottle horizontally over the piece of paper with the letters on it at a suitable distance (at about 15 cm from the paper with letters 4.3 cm tall).

EXPLANATION: Due to the phenomenon of refraction of light, passing through a cylindrical lens made up of two spherical dioptres (e.g. a glass bottle full of water), we are able to invert an image. Thus, in this case, we can see an inversion of the letters in LEAD OXIDE with respect to their horizontal symmetry. Furthermore, we can see that only the L and the A are inverted because all the other letters are symmetrical with respect to their horizontal axis and remain the same when inverted. 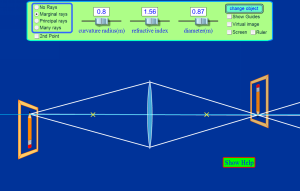