OBJECTIVE: To observe the behaviour of a chaotic pendulum.

SETUP: One of the metal bars is placed perpendicularly on the wooden stand. The other bar is placed perpendicularly to the first one, so that it is parallel to the base. The magnets are stuck to the wooden base so that they are symmetrical with respect to its centre. A magnet tied to a thread is then suspended from the stand. This is what is going to oscillate randomly and chaotically due to the effect of the base magnets on it.

EXPLANATION: The chaotic pendulum experiment is one of many ways of showing Chaos Theory. This experiment consists of a simple pendulum with a magnet on it, which is suspended over several magnets placed symmetrically and uniformly on a base. When the pendulum is left to oscillate, we can see a random and chaotic movement due to the attraction exerted by the magnets. The chaotic character of the pendulum means the movements it makes are distinct and the same series is never repeated. 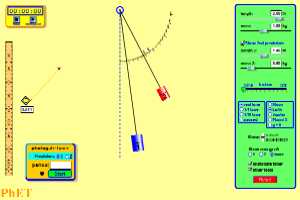