PRESENTATION:  While  rubbing  2 objects,  a charge-transfer  takes place and  then charged materials  are converted into  neuter ones.

INTRODUCTION: Electrostatics studies the electrical forces produced by charge distributions by means of concepts such as electrostatic field and electric potential and of laws of physics such as Coulom’s law. Historically, electrostatics was the branch of electromagnetism that first developed. Later on, Maxwell’s laws made it possible to demonstrate that the electrostatic laws and the laws governing the magnetic phenomena can be jointly studied in a same theoretical field called electromagnetism.

OBJECTIVE: To check the interaction between two bodies electrostatically charged.

SET UP:  We tie the ends  of the cord to the ends of the ruler trying to place them as symmetrically as possible with respect to the centre so that the rule stays in a horizontal position. We hang the ruler on the hanger by the cord and start rubbing the marker against the piece of cloth during some seconds. Once the ruler has been electrostatically charged we approach it to one end of the ruler and observe that an attraction between the two objects is produced and this makes the ruler turn on its own axis. 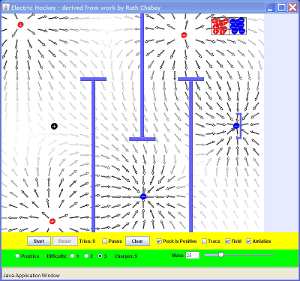