PRESENTATION: On a bar, four pendulums of distinct lengths are placed and made to oscillate at the same time in a direction perpendicular to the bar. When the frequency of the applied external force coincides with the natural frequency of any one of the pendulums, then that pendulum acquires an oscillation with an amplitude that is much greater than that of the others.

OBJECTIVE: To demonstrate in a practical way how amplitudes vary in oscillating systems depending on the force applied.

SETUP: Tie the baubles to the metal bar, so that external periodical force we apply is the same for all four oscillating systems. This will allow us to analyse the variance in amplitude. Very similar experiments can be carried out using the same basic theory used for this type of practical demonstration of mechanical resonance.

EXPLANATION: Because our four oscillating systems are joined to the same bar, the force we apply to the bar is also applied equally to the four systems. Using several different forces, we can see in a practical way how each system has its own natural frequency, which, when it coincides with the external force, reaches its maximum amplitude compared to the others, which, as a rule, have low amplitudes.

APPLICATIONS: Although resonance may appear to be a very complex physical situation, it is behind some phenomena that we can see in our daily lives. In this interesting explanatory article, we can see how the most famous example of mechanical resonance, the collapse of Tacoma bridge, is compared to how a grandfather pushes his grandson on a swing.

But that is not all. Resonance also explains relatively common scenes such as why a very high-pitched voice is able to break a glass, or why armies have to break step when they cross bridges to prevent the marching troops from entering into resonance, or why we notice our car vibrating at a particular speed as it enters into resonance and we have either to speed up or slow down to solve the problem. This phenomenon is still not 100% under control, which might sound strange, but is demonstrated by the problems encountered at the “Millennium Bridge” in London on its opening day in 2000, a relatively recent date, and which can be seen at the following link: 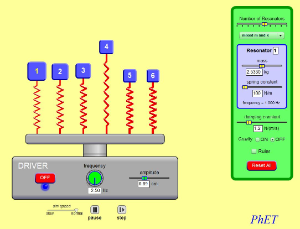