PRESENTATION: A trigger loaded with two steel balls keeps them in equilibrium at the same height. When the trigger is released one ball describes a free fall while the other follows a parabolic movement. Although it is subtle to be perceived, the vertical fall of both balls due to the action of gravity makes their impacts on the ground simultaneous.

INTRODUCTION: Gravity is one of the four basic interactions in Physics. It produces the acceleration that any body experiments due to the presence of any other astronomical object. It is called also as gravitational interaction or gravitation. This gravity produces a force that attracts any body to the mass creating it, and this force follows the direction of the line linking both centers of mass, so it is vertical to the earth surface. So, two bodies with the same mass falling from the same height, one initially motionless and the other with a certain initial horizontal speed will reach the ground simultaneously. This is described by the “Galileo principle of independence”.

OBJECTIVE: To show that two equal bodies falling from the same height, one with initial horizontal velocity and the other without it reach the ground simultaneously.

MATERIALS: a stand formed by a wooden prism, a metallic shelf, a spring, a trigger, two steel balls.

SETUP: A simultaneous fall device must be designed. Using the prism as standing bases the metallic shelf is placed. One ball is propelled horizontally by the spring, while the other is let to fall freely, the trigger produces the launching of both balls, one describing a parabolic movement and the other a free fall.

EXPLANATION: The experiment demonstrates the Galilean Principle of Independence, when a point is affected by two simultaneous movements superimposed, its movement is independent of the simultaneous or consecutive action of both movements. Accordingly, both balls reach the ground simultaneously although they follow different trajectories, because one follows a rectilinear free fall while the other follows a parabolic movement. 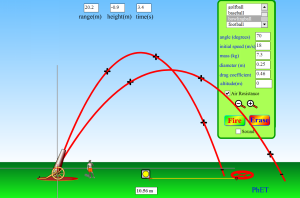