INTRODUCTION: the discovery of the existence of a force between charges in movement and magnets was accidentally made by Hans Christian Oersted in 1820, a Danish professor of Physics. At the end of a class she tried to show there was no relation between electricity and magnetism by means of a current that passed by a magnetized needle. In words of one of his disciples “he was perplexed when he saw that the needle showed a large oscillation.”

OBJECTIVE: to check that the electric current creates a magnetic field around it.

EXPLANATION: Creating a simple circuit with a generator (battery) and some cables linking both poles, the electric current that flows through them creates in its movement a magnetic field that acts on a compass when approached, provoking a magnetic force which orients the magnet in the direction of the total magnetic field (the one created by the current and the earth’s). With this experience, Oersted related electricity with magnetism for the first time. 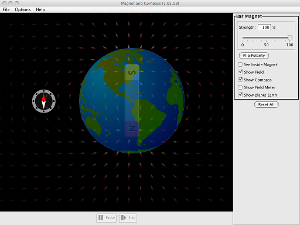