PRESENTATION:  Electrically neuter matter has the same number of protons and electrons and can be charged when rubbing it with another object and there is electron transfer. In this case another more electroaffinitive material will obtain a negative charge because it attracts electrons towards itself while a less electroaffinitive material will obtain a positive charge because it yields electrons.

INTRODUCTION: The electric charge is a physical property of some subatomic particles which manifests itself by means of forces of attraction or and repulsion among them. The electrically charged matter is influenced by the electromagnetic fields, being at the same time their generator. The so called electromagnetic interaction between charge and electric field is one of the four fundamental interactions of Physics. From the perspective of the standard model, the electric charge is a capacity of the measure a particle possesses for the exchange of electrons.

OBJECTIVE: to check the behaviour of two charged spheres when a negative charge approaches them.

SETUP: We cover the balls with aluminum foil and we hang them from the holder so there is contact between them. We charge the balloon negatively rubbing it with the piece of wool and we approach it to one of the balls. Then a repulsion can be observed, provoked by the negative particles of the sphere. This first sphere is charged positively and the second negatively. 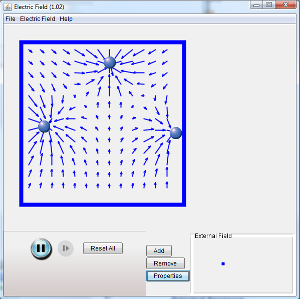