PRESENTATION: The conductivity of a dissolution relates to the existence of dissolved salts. Their dissociation generates cations and anions capable of transporting the electric energy under the action of a difference in the electric potential.

INTRODUCTION: Conductivity is the measure of ther facility with which the electrolitical current flows trhough a solution, it varies according to:

OBJECTIVE: to observe the conductivity in water depending on the temperature and on the concentration of the dissolution.

SETUP: A series circuit is set up formed by: battery, electrodes, electric bulb and cables. The electrodes are introduced in a contained with water. As the salt is poured and/or the temperature is raised the bulb will give light with higher intensity.

EXPLANATION: When we introduce the electrodes in water with null concentration, we observe that there is no electricity flow- As we add salt the electrical charges are transported by the ions Na-Cl. The difference in potential between them makes the ions move. The positive are attracted by the cathode and the negative by the anode. Due to that it is possible that there is an electric current in the liquid. 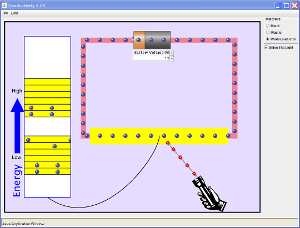