PRESENTATION: A metal plate is held at its centre point over a frequency generator and harmonic excitation is applied to it at different frequencies. The stationary waves produced are easily seen by placing sugar or sand on the plate. This is because the small particles locate themselves at the nodes caused by the vibration, which correspond to those points at which they are at rest.

INTRODUCTION: The geometrical patterns formed by a fine layer of sand deposited on the metal, or glass, plate vibrating at different frequencies produce stationary waves that divide the plate up into regions vibrating in opposite directions, delimited by lines of zero vibration called nodal lines. This was discovered by the German physicist, Ernst Florenz Friedrich Chladni. For each type of frequency a different class of increasingly complex pattern is generated on the vibrating membrane.

OBJECTIVE: To show the different vibration modes of an elastic surface subjected to frequency excitation.

SETUP: The base, which acts as a support for the sheet on which the sugar is placed, is connected to the low frequency amplifier using the connection cables. In this way the different geometric patterns formed on the sheet after varying the frequency of the amplifier can be appreciated.

EXPLANATION: If a plate that has previously been covered with some sugar is made to vibrate, then the patterns and nodal lines formed on it can be seen. These correspond to the areas and lines where the plate does not vibrate, that is, the nodes of the stationary waves that are formed on the plate, which is where the sugar accumulates. In this way the different vibration modes of the plate can be observed. 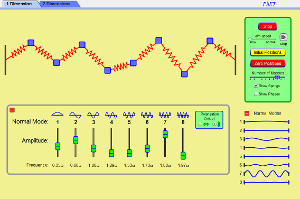