PRESENTATION: A non-conductive material (with strongly linked charges that can slightly move from their position of equilibrium) under the action of an external electrical field polarizes and renders a superficial charge. If the material is conductive, there is a free charge movement that generates a superficial charge and the final behavior under an external field is similar.

INTRODUCTION: Electrical polarization is a vectorial field that expresses the density of the dipolar electrical moments (the product of the electrical charge and the distance between charges of the dipole) permanent or induced in a dielectric material (bad/poor electrical conductor).

OBJECTIVES: To prove the existence of this distribution of charges.

SETUP: To do this experiment you only need a rolling object, a comb and a cloth to rub it so that it can be electrically charged. It may happen that the tin, if too heavy, does not roll when the charged combed is approached. In this case it can be cut to obtain a lighter ring which can move more easily. Besides, other means to generate more electrical field (therefore more strength) on the tin can be applied, such as a ruler or a rubber stick, which can be rubbed against the skin or the hair. The effect can be more spectacular, even with high environmental humidity, if a Fun Fly Stick is applied:

EXPLANATION: When two bodies are rubbed, the electrons of one are torn and go to the other. As a result, the first one is left without positive charge and the second without negative. If the bodies are bad electricity conductors (plastic, wool, hair) the charge can’t be distributed and can’t move quickly through the material, which then remains localized in the body for some time (electrostatic charge). When an object with this load approaches another that is neuter, the first induces a distribution of charges in the second. This is called polarization in the case of dielectric material. 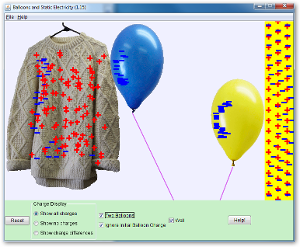