PRESENTATION: Analogue scales balance the weight of an object with the elastic force of a spring. In an accelerated system, the reading they give varies with respect to the rest position in accordance with Newton’s Second Law.

INTRODUCTION: Identification of the variation of forces under certain conditions and diverse moments (intervals of time) is crucial when handling loads or carrying out processes which resort, on a daily basis, to the application of Newton’s three laws. Examples include industrial loading, machine construction, and transport.

OBJECTIVE: To verify in a practical way, using Newton’s laws, the variation in behaviour of the forces that intervene in a system according to a change in conditions.

SETUP: The scales are placed with a person on them in a lift. A check is made of the weight reading on the scales initially and then the lift’s destination is chosen: one to a floor above the starting point; and another to one below it. During each trip in the lift a reading is made of the new weight shown by the scales.

EXPLANATION: Initially, with the test weight in the lift at rest, the first and third laws of Newton can be observed (law of inertia and law of action-reaction) in that the weight on the scales presents an initial state that is in equilibrium of forces and the scales, which measure the normal force, will register the weight due to the fact that in this state both the normal and the weight coincide.

Later, due to the accelerated movement of the lift, this equilibrium will tend to alter. Taking into account Newton’s second law (law of movement) an explanation can be given for this change, which is seen as a change in the normal registered by the scales: greater on the way up, lower on the way down. 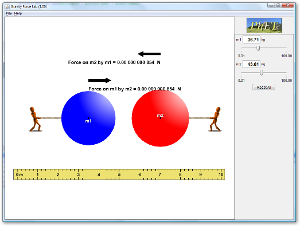